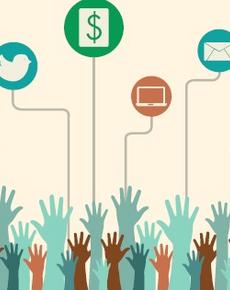 Monday, September 8, 2014
John Kamensky
The White House’s Open Government initiative encourages citizens to become more actively engaged in budget decisions in their communities. How does this work in practice? Do busy citizens actually get involved?

work in practice? Do busy citizens actually get involved? Inspired by successful efforts in Brazil and other countries around the world, several U.S. communities have undertaken pilot efforts to allow citizens to directly decide how monies are spent in their neighborhoods. However, one of the biggest concerns raised by critics of this approach is that not enough citizens actually participate to make the efforts meaningful and legitimate. A new report for the IBM Center by Dr. Victoria Gordon, Western Kentucky University, says that expanding the use of social media in the participatory budgeting process holds promise in addressing this concern. Dr. Gordon interviewed organizers and participants of participatory budgeting initiatives in Chicago, St. Louis, and Boston, as well as leaders of non-profit advocacy groups such as the Participatory Budgeting Project, to understand the state-of-the-art in participatory budgeting in the U.S. She then offers some insights and actions community leaders might take, if they want to introduce participatory budgeting in their own communities. What is Participatory Budgeting? Dr. Gordon says “Participatory budgeting empowers citizens by placing budget decision-making in their hands.” Originally developed more than two decades ago in Porto Alegre, Brazil, this approach to community building has been replicated in more than 1,000 cities across the globe, and about two dozen in the U.S. Dr. Gordon says that this approach increases budget transparency, creates a more educated citizenry, creates a greater sense of community, and instills a sense of social justice. According to Mary Bunting, city manager of Hampton, Va., it also leads to better outcomes for the community. How Does It Work in Chicago? “Chicago’s northernmost ward, the 49th Ward, has a five-year history with participatory bud­geting,” writes Dr. Gordon. “Under the leadership of Alderman Joe Moore, the 49th Ward is believed to be the first political jurisdiction in the nation to adopt this approach to budgeting.” The ward has about 57,000 residents with great ethnic diversity – speaking more than 80 different languages. Alderman Moore’s rationale, he explains, is that: “We need a new governance model, one that empowers people to make real decisions about policy and spending decisions … In an experiment in democracy, transparent governance, and economic reform, I’m letting residents … decide how to spend my entire discretionary capital budget … The process is binding. The projects that win the most votes will be funded … Hundreds of residents … many of whom have never before been involved in a civic activity, have become engaged in the participatory budgeting process … They know they have the power to make decisions, and that their government is not just hearing them but actually following their mandate.” Alderman Moore annually is allotted by the city $1.3 million for capital improvements in his ward. He convenes neighborhood assemblies in October to collect ideas for possible projects. Once concrete, viable projects are defined, community representatives from each neighborhood serve on a steering committee to narrow down the original list into a final list. This final list is then voted on by a ward-wide assembly of citizens in April or May, writes Dr. Gordon. Journalist Todd Newcombe, Governing, also examined the Chicago initiative a couple years ago and writes: “Not surprisingly, they used it to repair the sidewalks, and then they used what was left over to install new streetlights, community gardens and some public murals.” The voting attracts an ever-increasing number of citizens, from 913 in 2011 to 1,763 in 2014. Social media has helped increase participation, but to date its use has been “limited and sporadic,” according to Gordon, who notes “There is a great need and great potential to increase and expand social media platform uses to expand and encourage participation.” What Will It Take to Get It Right? Dr. Gordon says there are three sets of actions that community leaders should take if they want to promote effective participatory budgeting: Create the infrastructure necessary for the participatory budgeting process. “Communities that use participatory budgeting need institutional social media platform policies,” notes Dr. Gordon. She emphasizes that social media should be used to complement other forms of communication, and not be the primary emphasis of community leaders. Increase citizen participation in the process. Dr. Gordon says: “Communities should build on existing and active social media platforms that citizens in the community are currently using.” They should also proactively identify who is being left out and work to include them. Assess and increase participatory budgeting’s impact. “Communities should identify best practices, share and exchange information with other communities, and support further research efforts,” recommends Dr. Gordon. This should include exploring the potential for electronic voting as well as soliciting feedback on ways to improve the process. The White House’s national action plan for Open Government says: “Participatory budgeting allows citizens to play a key role in identifying, discussing, and prioritizing public spending projects, and gives them a voice in how taxpayer dollars are spent.” It not only sponsored a forum to bring pioneering communities and advocacy groups together, but it sees participatory budgeting as one way “to solve the problems of our time . . . by involving the American people in shaping the policies that affect their lives”.