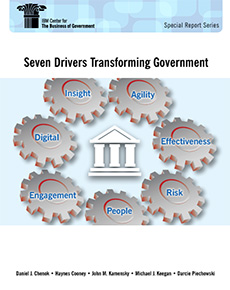 Monday, November 6, 2017
John Kamensky
Policy makers, agency leaders, and frontline staff regularly find themselves having to make sense out of data and information, drawing out insights to inform decisions.

Note:  The IBM Center recently released Seven Drivers Transforming Government, a series of essays exploring key drivers of change in government.  It is based on our research and numerous insights shared by current and former government officials.  This blog is the first in a series of excerpts from each of the seven essays.

The language around performance-related data in government decision making has evolved over the last quarter century. Today there are constant references to “evidence-based” decisions, “strategic analytics,” and “data-driven” reviews of progress. In addition, policy makers in recent years have promoted more use of “open data”—both within and outside government. At the same time, evolving technologies have reduced the cost of collecting and reporting such data. Yet the original challenge remains: how can government make sense of vast and growing amounts of data to develop new understandings that inform decisions?

Transforming Data into Actionable Insight. Decision makers’ use of data and analytics goes beyond just collecting and reporting evidence of program outcomes. New technologies, such as cognitive computing, are helping decision makers identify meaningful and actionable information that can trans- form data into insight leading to effective action.

“Insight” offers the power to gain understanding from data, people, or a situation not immediately evident on the surface. Insight enables leaders to uncover a solution and act based on keen and clear observation. Observation, however, does not lead immediately to insight. Government leaders must make interpretations shaped by context, knowledge, and the experience of decision makers—implicit knowledge, often built up after years of experience.

Increasingly, real-world experience in the public and private sectors shows the potential      to open the “black box” of making decisions and choices based on a more sophisticated    and nuanced approach for converting data to insight based on advanced analytics. For example, local police now use multiple historical data sets—past burglaries,  weather, time of day—to predict future crime patterns, leading to strategic re-deployments of officers on a beat and sharp reductions in crime.

Increasing the Availability of Data. The Government Performance and Results Act of 1993 (GPRA) and subsequent legislation have contributed over the past two decades to the development of a more robust supply of useful data and performance information that serve as the foundation for evidence-based insights and decisions. Examples of this trend include:

Even given this increase in data availability, governments must continue to address data quality and reliability—especially with data from multiple sources, where users lack a deep view of how data were collected or interpreted. In addition, statutory barriers impede the collection and sharing of certain kinds of data, such as limits imposed by the Paperwork Reduction Act.

Pursuing Evidence-Based Policy Initiatives. Governments are now working to improve analytical capacities to develop evidence-based insights that can inform decision making. Building on the foundation of data and evidence developed during the early 2000s and the analytic capacity developed in federal agencies, the federal government undertook a series of initiatives beginning in 2009 to use these data and capabilities to improve government  policy  and  funding decisions . A host of external foundations and nonprofits championed these efforts, including Results for America, the Pew Charitable Trusts, and the Arnold Foundation.

New policy tools that rely on evidence to inform resource allocation include social impact bonds and tiered evidence grants. Additionally, new laws require some agencies     to set aside funding to conduct program evaluations or to earmark a portion of grants for programs that could demonstrate effectiveness. Many of these initiatives have benefited from bipartisan support. For example, a statute creating an Evidence-Based Policymaking Commission—co-sponsored by Speaker Paul Ryan and Senator Patty Murray—has identified ways to lower barriers to collecting and sharing data and to better use evidence in government decision making.

Building Analytic Capacity to Act on Evidence. Federal agencies’ capacity to act on the data they collect and the analyses they conduct based on data has grown steadily in the past decade.  Multiple factors influence this growth:

Continuing the Shift to Insight. Even with this wide range of progress in recent years, significant opportunities remain to move from “creating a supply of data” to “creating a demand for insight” that informs decision making. These opportunities include:

Conclusion. Multiple opportunities exist to address issues of turning data into actionable insight over   the next few years. Agencies can embed these approaches in their Agency Reform Plans and their budget requests. The Commission on Evidence-Based Policymaking final report, The Promise of Evidence-based Policymaking provides additional direction and impetus. Encouragement from nonprofits, such as Results for America’s nine-point legislative agenda advocating the integration of evidence into decision making, also helps create momentum in Congress.