Does Taking the Long View Help? 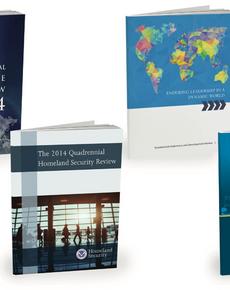 Monday, November 21, 2016
John Kamensky
Traditionally, agency plans last the length of a four-year presidential election cycle. But many challenges facing government are on a much longer cycle – such as building Defense weapon systems, adapting to climate change, and creating energy independenc

In 1996, Congress mandated the Defense Department to conduct a “quadrennial defense review” (QDR) of plausible future national security scenarios and to assess the effectiveness of different mixes of resources in addressing these scenarios.  These reviews – looking 15 to 20 years into the future -- are conducted every four years to inform Defense strategic efforts.

In a new report for the IBM Center, Dr. Jordan Tama, at American University, assesses the use of quadrennial reviews by Defense and three other federal departments.   He observes: “the QDR is generally viewed more favorably by policymakers outside of DOD than by defense officials inside the department.”  In fact, external policymakers see the QDR as an “excellent model of strategic planning,” and this led to the creation of similar efforts in the departments of Homeland Security, State, and Energy.

Background.  Dr. Tama writes: “The quadrennial reviews are extremely structured and intensive processes that span 10 to 18 months in length They are highly inclusive of departmental staff, and some departments include other agencies, states, localities, and private sector stakeholders.”  He found that these reviews are done differently in each of the four departments.  Some involve only internal staffs; others engage the public; while others actively engage a range of agencies as well as experts in selected fields.  However, in every case, the reviews have produced public reports that set out a vision for where the department is headed in coming years.

Tama’s research finds that these reviews are both loved and hated. One Defense official he interviewed quipped: “If God really hates you, you may end up working on a Quadrennial Defense Review.”  Another noted: “QDRs are ugly exercises. Everyone is defending turf.  But they are the best, and perhaps only, opportunity for the secretary to put a major imprint on the defense program.”

Defense QDRs Have Mix Reviews. To date, the Defense Department has conducted five quadrennial reviews.  In 2014, Congress revised the name of the QDR to the “Defense Strategy Review” and mandated a greater focus on assessing and mitigating risks.

Looking back over the past 20 years at the value of the reviews, there are mixed assessments of the highly structured process.  Detractors say that the highly inclusive approach results in the lowest common denominators for positions taken in the final report, and “that it is very difficult to deviate sharply from the status quo.”  But Tama also found: “The QDR has provided a mechanism for incorporating long-range analysis into strategic decision making, advancing the priorities of department leaders, socializing ideas throughout the department, and developing new initiatives.”

For example, Tama writes: “the 2006 QDR resulted in decisions to increase the size of U S special operations forces and grow the number of US submarines. The 2010 QDRdrove decisions to create new military units designed to disable weapons of mass destruction (WMD) in hostile environments and assist US governors with responses to WMD threats. In the latter set of cases, mid-level DOD officials used the review process to gain the support of more senior DOD officials for the new initiatives, which had been resisted by powerful parts of the bureaucracy.”

Experiences in Other Departments.  The three other departments using quadrennial reviews found that the reviews made important differences in their long-term strategies:

Lessons for Other Agencies.  The GPRA Modernization Act of 2010 re-set the timelines for when agencies are to prepare and submit their four-year strategic plans to Congress.  In the original law, agencies could develop strategic plans for periods of three to five years, at their discretion.  In the Modernization Act, all agencies must submit their final plans to Congress along with the president’s budget one year after the beginning of each four –year term of office.

So, in the coming cycle, draft agency strategic plans are due to the Office of Management and Budget by June 2017, with final plans to be submitted to Congress in February 2018.  Tama notes: “For the first time, the next president will benefit from legislation that promotes multiyear planning to shape the direction of federal agencies at the onset of a new administration.”

Therefore, for departments that are developing strategic plans, but do not conduct a quadrennial review, Tama offers several insights for top departmental leaders and agency strategic planners:

Government-wide Recommendations.  Tama writes: “Other studies have found that structured planning tends to improve government performance.”  Based on these studies and his research, he offers three recommendations to the White House and Congress: