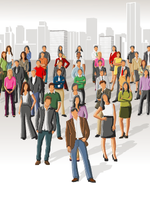 Monday, March 11, 2013
John Kamensky
Citizen engagement has traditionally been viewed as citizens participating in community activities such as testifying on policy proposals, budgets, and strategic plans. But government does more than policy and budget. And citizens want to do more than

How can governments at all levels engage their citizens in ways that are more meaningful – and fun -- to both the citizens and their community? A series of pioneering initiatives hold new promise that this now can be done on a much wider scale.

A new IBM Center report, “Beyond Citizen Engagement:  Involving the Public in Co-Delivering Government Services,” explores the growing phenomena of engaging citizens in the co-delivery of services. The authors, P.K. Kannan and Ai-Mei Chang, both with the University of Maryland, note: “The rise and increasing pervasiveness of digital social media – Facebook, Twitter – have dissolved the many technical barriers to widespread and sustained citizen involvement in actually co-producing and co-delivering public services.”

In addition, the rise of the millennial generation as it enters adulthood reinforces this new phenomenon, since they are both tech-savvy and highly service-oriented within their communities.  The private sector spotted this trend several years ago and pioneered a number of successful ways to engage their customers.  One well-known example is the LEGO Digital Designer, a place where children can design new models using a digital designer and compete with each other online. Another is Intuit’s TurboTax live community, where customers provide advice and help to each other; those who are most helpful are ranked higher on the site.

The co-delivery of public services has been around a long time, before technology -- just think of volunteer fire departments, citizen juries, and neighborhood watch. But today, technology allows many new paths for engagement.  Recent e-government trends have promoted self-service, such as renewing drivers licenses on line – but co-delivery is different.  The authors say there are three points in the policy cycle where citizens can now become engaged:

Is Co-Delivery Right for Your Program or Service?

Kannan and Chang note “Co-delivery is not right for every program or service.”  But by examining a range of pioneering initiatives underway, they were able to develop a checklist to conduct a cost/benefit/risk analysis as to whether a pilot would be warranted.  For example:

If your responses to these and other questions in the checklist are reasonably positive, then it might be worth considering!