Can the Government "Buy as One?" 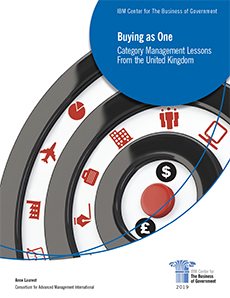 Wednesday, February 20, 2019
John Kamensky
Ridding the federal government’s buying system of unproductive red tape, streamlining how it buys things, and getting the best price has been a decades-long endeavor.

One path to address this imperative involves a buying reform widely used in the commercial world and other countries – notably the United Kingdom – called “category management.”   Given its potential for driving reform and reducing unnecessary spending, category management is increasingly seen as one of the U.S. federal government’s top Cross-Agency Priority Goals.

What Is Category Management?  Category management is a strategic approach to how an organization organizes to buy goods and services from vendors as a single entity.  The federal government spends about $500 billion a year on goods and services. More than half of this spending is for goods and services that are common across federal agencies, such as training, overnight delivery services, copier machines and travel services.  However, these are often purchased individually by more than 3,300 buying offices and 40,000 contracting officers. By “buying as one,” the federal government could leverage its buying power as a large customer and this could also reduce the need for vendors to constantly bid on redundant work.

The Office of Management and Budget (OMB) began promoting the use of category management in 2014 – four years after the United Kingdom began its effort. OMB is currently pursuing strategies to cumulatively avoid $18 billion in unnecessary procurement spending by next year and, according to its latest progress report, has made significant progress toward that goal. It has highlighted this effort as one of its 14 Cross-Agency Priority Goals in the President’s Management Agenda.

But, based on the United Kingdom’s experiences, it potentially could achieve greater savings.

The U.K. Government’s Approach.  A newly-released study by Anne Laurent for the IBM Center for The Business of Government details the U.K. government’s adoption of a category management initiative in 2010 and its evolution over the next eight years as it was implemented.

The U.K. government mandated agency use of category management in the midst of a belt-tightening effort to recover from the 2009 global recession.  It set a goal of cutting procurement costs by 25 percent over the next four years in nine categories of common spending, such as travel, fleet, printing, and IT.  Laurent’s report highlights key elements of how this was done:

The United Kingdom may be further ahead in implementing category management than the United States, but the U.S. and other governments could adapt these experiences to transform the buying of common goods and services “as one” in years to come.