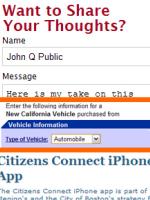 Wednesday, September 15, 2010
Gadi Ben-Yehuda
What does it mean to be a creator and how can we make it easier and more rewarding?

To be a creator is take the step from merely accessing information online (in the form of data or content) to adding new information (again, content or data) online.  Using online tools to submit forms or payment also falls into this category.  There are countless venues through which people can do this: through apps, government Web sites, and nongovernment Web sites.  More on each of these in a moment, becuase to talk about any of them requires an understanding of why anyone should visit any of them.

Though many people walk through the stages of Citizen 2.0 one rung at a time (I've already written about becoming a Consumer), some people jump right to this stage.  They're often motivated by a problem (e.g. graffiti on their streets,  a broken street light, an unkepmt public space) and they're looking for an easier way to notify thier government.  Sometimes, they're motivated by the possibility of saving time while performing a required activity, like renewing a license or paying a parking ticket.  Yet other times, they feel like they have an important contribution to make to the public dialogue, for example about a pending rule change, or about an issue they hold dear.

In short, people create for one (or more) of three reasons: to complain, to comply, and to converse and connect.

Perhaps the greatest motivator, or at least the most urgent, is the need for people to let their government know that it's failing them.  Before the advent of digital social media, people would flock to town hall meetings and agency hearings to give the government a peice of their mind.  Now, they can take to digital channels to do the same in real-time and with multimedia engagement.  Here are a few ways Gov 2.0 is helping Citizen 2.0 complain:

No one likes standing in line at the DMV to renew their license, much less doing their taxes by hand.  Both governments and private sector organizations have created online tools to help people fulfill their civic obligations:

Creating to converse and connect

This is the natural progression of people who begin the journey of Citizen 2.0 from Consumer.  They've read some blogs or comments on regulations and now want to add their own voice to the discussion.  Here are some places that they are likely to visit:

Of course, there are many nongovernment sites that feature conversations on governing, but most also tend to be politically self-selecting and the comments often tend toward the partisan.  In those kinds of environments, it is difficult to stay focused on questions of implimentation and management.

Next, I'll explore ways to move from creating content online to helping co-deliver services typically seen as the provanence of government.