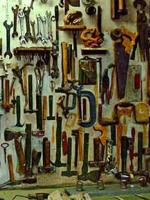 Thursday, October 7, 2010
Gadi Ben-Yehuda
Coordinators are the pinnacle of Citizen 2.0: they see a systemic, chronic, or pervasive problem in government or society and forge the tools or develop the processes to solve it.

If most of government, and Gov 2.0, is about ordinary people doing ordinary (though necessary, ennobling, and underappreciated) things, Coordinators are the people who are doing extraordinary things.  Both within government and beyond it, coordinators are the ones who are looking at the big picture and creating the tools that co-deliverers and creators use.

What do coordinators do?

Where co-deliverers see a discrete problem and then help to fix that one problem, coordinators see a pervasive, systemic, and/or chronic condition of government or society and make the tools or refine the procedures to alleviate it.

In each category below, there are more examples than I could ever write about (or you would ever want to read about).   I’m going to shine a light on a select few people and organizations who are working for systemic change or trying to tackle a problem that’s beyond the abilities of any single person or office.  (The Center for Disease Control's Janice Nall is terrifically prolific, and Ari Schwartz, formerly at the Center for Democracy and Technology and now at the National Institute of Standards and Technology are yet two more people I could write about at greater length)

There are many Fortune 500 companies that are involved in Gov 2.0 as well.  In part, they do it to burnish their reputation and give back to the communities in which their customers live.  But it also makes good business sense.  In a prior post, I wrote about how Gov 2.0 was taking a cue from McDonald’s and shifting some of the work from government to citizens.  Some companies are doing the opposite—they’re fulfilling tasks that used to be the domain of the government, and charging for their services.

To wrap up this series, I’ll discuss some ways that Gov 2.0 is changing what citizens (including corporate citizens) are able to do and how government agencies are either incorporating citizens into their operating plans or changing their missions in light of citizens’ changing needs and capacities.