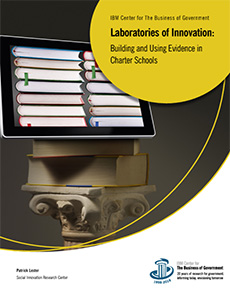 Wednesday, May 9, 2018
John Kamensky
This is National Charter School Week!

Charter schools have been a part of the landscape of U.S. elementary and secondary education for more than two decades, enrolling about five percent of K-12 public school students across the country.  They have been touted as providing choice to parents and students in the provision of education, and they have been long promoted as a key source of innovation in educational performance techniques. But are they really innovative?

In a new report by IBM Center Visiting Fellow for Evidence-Based Practices, Patrick Lester examines these premises and concludes “many charter schools have only partly delivered” on their mission to “test, validate, and adopt new practices in a public school environment.” He writes: “While there are many pockets of excellence. . . there appears to be less innovation than originally anticipated.”

In a review of available research, he found that most of it focuses on the effectiveness of the charter school model as a whole.  In contrast, there has been comparatively little research on individual practices used within these schools. He observes: “The chosen mix of school practices probably affects student outcomes.”

The school practices that research shows have been most consistently associated with positive academic outcomes in charter schools include:

Interestingly, when these same practices were adopted in traditional public schools in Houston, there were significant increases in mathematics achievement, but less on reading.

Furthermore, research shows that several factors that have been major selling points for charter schools turn out to not be very strongly linked to improved academic performance: