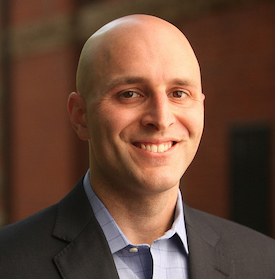 Thursday, October 28, 2021
Major Lev Mazeres
Blockchain - a solution to a problem that doesn’t exist, or a viable enabler

“To solve problems with agility in a complex, uncertain environment, the Army must leverage information and data – at scale – more quickly and effectively than our adversaries.”

“We’re just now discovering what is the state of our data.  Everybody loves to say the Department of Defense has all kinds of data.  It does.  Most of it’s crap.”

Introduction.  While the two preceding quotes are not directly related with one another, they highlight a disconnect that exists today regarding the state of the U.S. Army’s data, and the desired plans to leverage that data.  Focusing on one subset, specifically operating and support (O&S), reveals siloed data, of various quality, spread across disparate systems, vertical through echelons, and horizontal across the network of vendors the military relies upon to sustain the logistics tail of its various systems.  Ongoing efforts, particularly with the U.S. Army’s Enterprise Business Systems – Convergence (EBS-C) and the recent establishment of a Chief Data Officer under the Office of the Chief Information Officer demonstrate the Army’s acknowledgment of these gaps and a commitment to close them.  While these are essential steps, the solution ultimately implemented will no doubt involve the application of a variety of approaches and technologies, both foundational and emerging.  One emerging technology, blockchain, offers a viable path to address supply chain resiliency and protection, while increasing the velocity of assets – topics all stressed during the Association of the U.S. Army’s Sustainment Forum at this year’s annual meeting.  Use of blockchain technology creates data that is characterized by the consensus, provenance, immutability and finality necessary to ensure the veracity and trust of the data.  Trusted data is a key input needed for truly leveraging the exponential benefits of artificial intelligence and machine learning.

As defined by the National Institute of Standards and Technology (NIST), blockchain is, “a collaborative, tamper-resistant ledger that maintains transactional records. The transactional records (data) are grouped into blocks.  A block is connected to the previous one by including a unique identifier that is based on the previous block’s data.  As a result, if the data is changed in one block, it’s unique identifier changes, which can be seen in every subsequent block (providing tamper evidence). This domino effect allows all users within the blockchain to know if a previous block’s data has been subjected to tampering.  Since a blockchain network is difficult to alter or destroy, it provides a resilient method of collaborative record keeping.”

The resulting distributed ledger allows all permissioned users to see the same information, at the same time with immutability and transparency.  Furthermore, because each step of a product’s journey is documented, provenance of any one particularly item can be established with authority.  Finally, physical paper information can be stored on the blockchain along with all associated transaction data, eliminating human error, minimizing dispute resolution, and thus increasing efficiency.

An Example Problem.  While today’s vast network of Army depots continues to meet the demands of the fighting force they support, it’s accomplished through a patchwork of enterprise resource planning (ERP) systems built on sunsetting technology that rely on the diligence of its dedicated workforce to maintain operations.  As an example, take one precision guided munition (PGM) round and its journey from assembly to unit delivery.  At its origin its subcomponents are delivered from an ecosystem of sub tier suppliers to various contractor owned, contractor operated (COCO); government owned, contractor operated (GOCO); and government owned, government operated (GOGO) facilities for final assembly.  As the round is staged for shipment, its physical accountability is maintained in one “wholesale” system, while its financial accountability is maintained in another.  Upon departing the depot via secure ground transport, its departure status is updated for its physical accountability, but the secure third-party transport company separately maintains its actual GPS location and en route data.  Upon arrival to its customer’s Ammunition Supply Point (ASP), accountability is recorded in a legacy “retail” ERP system not synchronized with the “wholesale” ERP system, let alone the authoritative financial system which must be reconciled manually.   Finally, what if that round doesn’t perform to standard? How is the problem diagnosed, and how in depth can/does the root cause analysis go?  Now assume this round was delivered to a deployed unit, Army Prepositioned Stock location, or allied partner.  Imagine how many more transaction points encountered along with associated customs, inspections, and other regulatory paperwork that would need to be sorted through manually.

Blockchain Application.   If the Army created a blockchain for the same sequence of events, it would certainly be more efficient.  Sub tier suppliers record commission events of the raw materials required to assemble subcomponents, at which point the time required to build these subcomponents is recorded as a transformation event.  The shipment aggregation event is added to the blockchain along with payload data such as temperature, humidity, weather, vibration, and drop conditions/events provided by Internet of Things (IoT) devices, enhanced and informed by edge computing.  The blockchain continues to grow as subcomponents move up the assembly process, with appropriate quality assurance and control document data uploaded and attached along the way.  Those parties with a need to know are privy to detailed information as predetermined by the blockchain’s governance, while access is controlled on a rolling basis to those required.  When that same PGM round fails to perform to standard, instead of drawn-out process to perform root cause analysis (RCA), the fully transparent distributed ledger, shows the full provenance of the round.  In this case, full traceability enabled the team performing the RCA to rule out issues in transit or storage, or the actual assembly of the round that might have affected the guidance of the munition.  Instead, it’s quickly discovered the most likely culprit is the propellant used in the round’s motor.  Sampling from other rounds in the same lot, easily identified on the blockchain, reveal impurities most likely introduced during refinement.  Additional information easily pulled from the blockchain identifies the current day location of the remaining rounds from the same lot, allowing an ordnance team to replace their faulty motors, eliminating future failures and realizing substantial costs savings by re-tooling vice demilitarizing an entire suspect lot of high-dollar PGMs, all in real time.  Subsequently, the blockchain adjudicated data feeds into, now, high integrity datasets training AI algorithms to enhance future fault detection and highlight anomalies from production data for faster remediation before a round or subcomponent ever leaves the fabrication facility.

Next steps.  The preceding example highlights one of the possible benefits blockchain can provide in the Army’s efforts to minimize O&S costs while increasing the availability of the systems the Army relies to execute its missions.  However, to say blockchain is the answer is both foolish and irresponsible.  Additionally, no one program office can go at it alone, while at the same time no one authority should mandate a blockchain solution.  Multiple distributed ledgers will only result in a new form of stovepipes of excellence, while a one size fits all directed policy imparts undue burden on program offices where a blockchain approach may not be the appropriate solution.  Concurrently, the Army needs to learn from those DoD entities conducting blockchain exploration, such as the Defense Information Systems Agency, as well as other government agencies such as the Food and Drug Administration pilot of blockchain for the pharmaceutical supply chain and the General Services Administration’s use of blockchain to expedite proposal review processes.  Most importantly, the Army needs to set up an environment that leverages the “national security experts” in industry and provide forums for open discussion and technology demonstration.  The Army has a complex data problem that can’t solely rely on Requests for Information and Industry Days to inform actionable requirements.  Additionally, while the use of Other Transaction Authorities provides a means for prototyping potential pilot programs, they require commitment from the Army to follow through to procurement and deployment at scale in order to justify the risk and costs incurred by industry.  Only through close and trusted teamwork with industry will blockchain, or other more suitable data solutions be refined.

Summary.  Many agree that blockchain is a hard sell.  Its implementation must be deliberate, its governance sound and its adoption universal.  Some will cite that the systems we have in place today, while not perfect, are good enough.  However, for a current day solution that manages in excess of $22 billion in inventory with tens of thousands of vendors, imagine what just an incremental improvement could provide?  To give you an idea, when the world’s largest container shipping company, Maersk Line, implemented blockchain they reduced the cost of paperwork by 70-90% depending on the specific supply chain and list of participants, reduced shipping times of goods in the United States by 40% through the reduction of queues and acceleration of workflows, and reduced the cost of basic questions  such as “where’s my container,” from 5-10, down to 1-2.  More importantly, if the Army is ever going to move away from push/pull logistics and transition to leveraging machine learning and AI to provide predictive supply requirements to ensure the right amount of sustainment is at the right location, at the right time, and in the smallest footprint possible, the Army needs to ensure its data is secure, accurate, and trusted.  Blockchain provides one technology that can enable the Army to solve problems with agility in a complex, uncertain environment… more quickly and effectively than our adversaries, simply by ensuring our data isn’t crap.

Major Lev Mazeres, U.S. Army, is an active duty acquisition officer currently serving as a Research Fellow in the Army’s one-year-long Training with Industry Program at IBM.  His research fellowship is intended to develop his technical expertise and analytic leadership so that he can apply industry best practices in his future Army assignments.  This blog post was written during his time at the IBM Center for The Business of Government.

***The ideas and opinion presented in this blog post are those of the author and do not represent an official statement by IBM, the U.S. Department of Defense, U.S. Army, or any other government entity.***