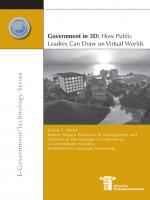 Thursday, June 3, 2010
John Kamensky
The Air Force is assigning 3D avatars to all new recruits. Agencies are creating a government-only 3D world for training and joint exercises. Government has joined Second Life. This is not your father's government!
I saw an intriguing article in Government Computer News, by Alice Lipowicz, on how the departments of Agriculture, Homeland Security, the National Defense University, and the Air Force are getting together to create a government-only 3-D “virtual world” where they could conduct training and joint exercises. Paulette Robinson, dean of NDU’s “iCollege,” told GCN “Webinars are boring,” and that the immersive experience of bringing people together on-line can be dramatically improved. This new “vGov” site will launch in July.
What Are 3-D Virtual Worlds? The IBM Center sponsored a report several years ago by David Wyld on the opportunities for using 3-D virtual worlds in government.   He noted that computerized virtual worlds are a convergence point between the real world and the new Web 2.0, where users interact and create their own content. It began with the video game industry in the 1990s which led to multiplayer games online, such as World of Warcraft. It has since evolved into virtual worlds without a “script” such as Second Life, where users create their own avatar, or online personality which can shop, travel, study, socialize, and work. Corporations are creating online worlds for their customers and employees to interact. Government is piloting different approaches in 3-D virtual worlds, as well.
Using Virtual Worlds in Government. Governments are piloting different uses of 3-D virtual worlds. These include:
Reaching Citizens in New Ways. The U.S. House of Representatives’ Energy and Commerce subcommittee held a congressional hearing in the virtual world, Second Life, in April 2008. The chairman, Ed Markey, also spoke before a UN Conference in Indonesia via Second Life when he found he could not be there in person.
Collaborating Internally. Corporations are finding that “in-world” meetings are more productive and effective than conference calls. Virtual worlds provide a new dimension in collaboration and creating connectedness in organizations that are physically widely disbursed.   For example, in the United Kingdom, the National Physical Laboratory has created “Nanotechology Island” in Second Life to allow scientists from around the world to meet and collaborate on projects. In the US, the Central Intelligence Agency is using virtual worlds to hold unclassified meetings and training for employees.
Conducting Training and Simulations. Simulation training in a virtual environment is inherently safer than engaging in a “real” exercise. The Transportation Security Administration is looking into the use of virtual worlds to train its 40,000 security screeners to improve their accuracy and customer service. The U.S. Army is creating simulation tool kits to conduct realistic scenario training in virtual worlds. Emergency management systems are using virtual worlds to conduct training and then use “replays” to critique what was done right or wrong during an exercise.
Recruiting New Employees. The U.S. Army’s “America’s Army” multiplayer game, first launched in 2002, has drawn about 9 million users who have put in well over 200 million hours of play. Recruiters say the game was a factor in shaping interest of many new recruits.   Similarly, the Air Force and NASA have engaged potential recruits via their virtual world sites. In fact, the Air Force will give all new recruits an avatar that will follow them throughout their entire career!
Implementation Issues. Launching and maintaining a presence in virtual worlds is not easy. There are a number of implementation issues that need to be addressed, including:
A Guide for Executives -- Keeping Up with Virtual Worlds. Even given the potential challenges of creating and using virtual worlds, executives should become familiar with what will, to many, will be a strange technology. Understanding virtual worlds will likely be a key strategic technological disruptor in how organizations work. Here are some pointers for how to begin exploring virtual worlds:
The opportunities for using virtual worlds is bounded only by the limits of imagination. There are new worlds to explore, and create, that can make government a more exciting place!