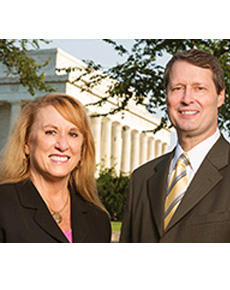 More than 60,000 veterans live on America’s streets. Susan Angell, Mark Johnston and their interagency team have made major strides toward ending veterans homelessness by 2015.

Some have called it a “national disgrace,” the presence of thousands of homeless veterans on American streets and in shelters.

In an effort to confront this intractable problem, two federal departments have joined together to reach the goal of ending veteran homelessness by 2015. It is a challenging task given the high national unemployment rate and the influx of individuals returning from Iraq and Afghanistan, but the Department of Housing and Urban Development (HUD) and the Department of Veterans Affairs (VA) have made significant inroads.

HUD and the VA reported a 12 percent drop in homelessness among veterans, from about 76,000 in 2010 to 67,000, as of January 2011. Officials are awaiting the full tabulation of the January 2012 census of the homeless, but expressed optimism that further progress has been made.

Leading the departmental teams are Mark Johnston at HUD and Susan Angell at the VA, both of whom bring many years of experience to the table, significant management skills, knowledge about housing and the needs of veterans. Angell’s team includes Peter Dougherty, Lisa Pape and Vincent Kane, while Johnston’s includes Ann Oliva and Laure Rawson, among others.

The collaboration is unusual, and has allowed both departments to devote expertise and resources to a problem that neither could solve alone.

HUD Secretary Shaun Donovan said Johnston has technical knowledge, an ability to build cohesive teams internally and partnerships externally, and a willingness to make improvements based on data analysis and feedback from the field. He described Johnston as an individual with “a quiet persistence” and an unwavering dedication to the mission.

“For Mark, it is always about the veterans living on the streets,” said Donovan. “It’s always that person or family in front of us that matters.”

John Gingrich, the VA chief of staff, said Angell and her team have been able to eliminate the “stovepipes” that in the past prevented full cooperation between the VA and HUD, and have brought commitment and urgency to serving the needs of homeless veterans.

“Why should someone who fought for our nation sleep on the streets?” said Gingrich. “Susan and her team see everything they do as changing the lives of veterans. For them, this is not a job, it’s a calling.”
The departments administer the HUD-VA Supportive Housing Program (HUD-VASH), which combines HUD vouchers for veterans to rent privately-owned housing, and targeted VA services such as health care, mental health and substance abuse treatment, vocational assistance, job development and placement.

The program works with public agencies and community organizations to implement many of the targeted interventions needed to assist veterans.

A key program tenet is “housing first,” with permanent housing as the starting point so caseworkers can find and check in more regularly with veterans, and more effectively provide services. The services help veterans get back on their feet and become productive, keeping them from ending up back on the street, in emergency rooms or in trouble.

HUD and VA regularly share information. HUD provides the VA with weekly updates on voucher use, along with detailed reports on the status and recent activity of every veteran in the program.

The VA tracks the number of veterans who are screened and approved for voucher eligibility, are referred to public housing authorities and receive vouchers. The team meets periodically with leadership at both departments to discuss progress and areas requiring improvement.

There are more than 30,000 formerly homeless veterans and their families receiving housing and support services. For fiscal year 2012, Congress has approved an additional 10,000 housing vouchers for homeless veterans that will allow the program to come closer to reaching its goal.

** Photograph courtesy of the Partnership for Public Service