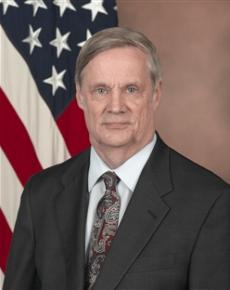 As Under Secretary of Defense (Comptroller), Robert F. Hale is the principal advisor to Secretary of Defense Leon E. Panetta on all budgetary and fiscal matters, including the development and execution of the Defense Department’s annual budget of more than $600 billion. As Chief Financial Officer, Mr. Hale also oversees the Department’s financial policy, financial management systems, and business modernization efforts.

At the time of his nomination by President Barack Obama in January 2009, Robert Hale was Executive Director of the American Society of Military Comptrollers (ASMC), the professional association of Defense financial managers. For three-and-a-half years, he led the society's certification program (the Certified Defense Financial Manager program), as well as training programs, a professional journal, and other activities, including ASMC's National Professional Development Institute, an annual conference which attracts more than 3,500 participants.

From 1994 to 2001, Mr. Hale served in the Pentagon as the Assistant Secretary of the Air Force (Financial Management and Comptroller), where he was responsible for annual budgets of more than $70 billion, efforts to streamline Air Force financial management, and compliance with the Chief Financial Officers Act.

For the 12 years prior to his Air Force service, Mr. Hale headed the National Security Division at the Congressional Budget Office (CBO), developing quantitative analyses of major defense budget issues and testifying frequently before Congressional committees.

Earlier in his career, Mr. Hale was a senior fellow and head of the acquisition and grants management group at LMI, a consulting firm specializing in service to the Federal government. He also spent three years as an active duty officer in the U.S. Navy and served as a staff analyst and study director at the Center for Naval Analyses.

Mr. Hale graduated with honors from Stanford University with a B.S. in mathematics and statistics. He also holds a Master’s degree in operations research from Stanford and an MBA from the George Washington University. He is a Certified Defense Financial Manager (CDFM), a fellow of the National Academy of Public Administration, and a past member of the Defense Business Board.