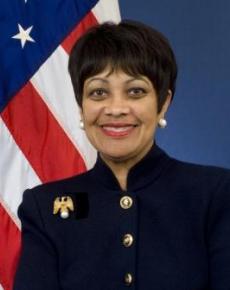 Linda Jacobs Washington assumed the position of Senior Policy Advisor for Community Initiatives in July, 2010. As the Senior Policy Advisor, Ms. Washington oversees community outreach activities for the Department of Transportation. She is the Chair of the Local Federal Coordinating Committee of the Combined Federal Campaign for the National Capital Area. The Combined Federal Campaign is the only authorized workplace charitable giving drive for employees in the Federal workplace. Under Ms. Washington’s leadership, in 2009, the Combined Federal Campaign broke fundraising records, despite challenging economic times with Federal employees pledging more than $66.5 million to support over 4,000 local, national, and international charities.

On May 25, 2007, she was appointed as the Assistant Secretary for Administration. In this capacity, Ms. Washington served as the principal advisor to the Secretary of Transportation on all matters relating to the organization and management of the Department and provided leadership in the delivery of centralized services to the Department's 10 operating administrations through a working capital fund. These services included human resources, security, transportation services, printing and graphics, mail, facilities, and procurement and grants programs. Ms. Washington served as the Chief Human Capital Officer for the Department. She was responsible for the planning and relocation of the Department to its new headquarters building in 2007, the first constructed building with enhanced post 9-11 security requirements and energy saving design elements. Ms. Washington joined the Department in May 2003 as the Deputy Assistant Secretary for Administration.

Ms. Washington came to DOT after spending 9 years at the Library of Congress as the Director of Integrated Support Services (ISS). As Director of ISS, she managed support operations, which included contracts and logistics, printing and mail operations, health and safety services, and facilities operations. She was the Library of Congress Designated Agency Safety and Health Official (DASHO) and the Library's Emergency Manager. As the DASHO, Ms. Washington managed critical incidents, including the 9/11 and anthrax emergencies