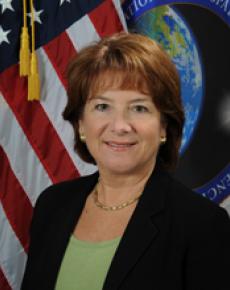 Ms. Letitia A. Long was appointed Director of the National Geospatial-Intelligence Agency on August 9, 2010.

Ms. Long entered civilian federal service with the U.S. Navy in 1978 as a Project Engineer in training with the David Taylor Research Center. Upon completion of her degree in 1982, she continued with the David Taylor Research Center for six years, working on various submarine acoustic sensor programs. In 1988, Ms. Long joined the Office of the Director of Naval Intelligence where she managed Intelligence Research and Development programs.

Ms. Long earned a Bachelor of Science in Electrical Engineering from Virginia Tech and a Master of Science in Mechanical Engineering from the Catholic University of America. She is the recipient of the Department of Defense Medal for Distinguished Civilian Service, the Presidential Rank Award of Distinguished Executive, the Navy Distinguished Civilian Service Award, the Presidential Rank Award of Meritorious Executive (two awards), the National Intelligence Distinguished Service Medal (two awards) and the Defense Intelligence Agency Director’s Award (two awards). In 2011 Ms. Long received the Charlie Allen Award for Distinguished Intelligence Service from the Armed Forces Communications and Electronics Association, was decorated with the Medal of Merit by the King of Norway, and was appointed to the rank of Chevalier in the National Order of the Legion of Honor of France.