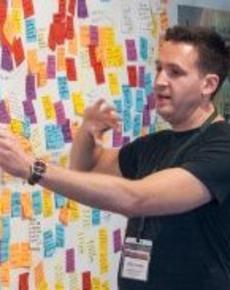 Zvika Krieger is the U.S. Department of State's Representative to Silicon Valley and Senior Advisor for Technology and Innovation. He works with the technology and innovation sectors on tackling global challenges, leading initiatives on providing assistance to refugees, tracking nuclear weapons, expanding access to clean energy, and countering violent extremism. He also helps the State Department plan for the international impacts of emerging technology trends, such as blockchains, gene editing, and artificial intelligence. He teaches "Hacking for Diplomacy" and "Designing for Refugees" at Stanford and "Designing Technology to Counter Violent Extremism" to UC Berkeley.

He previously created and led the Department's Strategy Lab, an innovation hub that utilizes design thinking, strategic foresight, and visual facilitation to convene diverse stakeholders and generate innovative solutions to complex international challenges. He also taught the inaugural Institute for Design + Public Policy at the Rhode Island School of Design.

He was previously a Strategist in the Office of the Secretary of Defense, where his portfolios included climate change, Middle East strategy, policy innovation, and emerging technology, and for which he received the Secretary of Defense Award for Excellence. He contributed to the 2014 Quadrennial Defense Review and was one of the lead authors of the Department's Climate Change Adaptation Roadmap. He began his career in the Pentagon as an advisor to then-Deputy Secretary of Defense Ashton Carter. He previously served as Senior Vice President of the Center for Middle East Peace and created the "Is Peace Possible?" interactive website.

Before joining government, Krieger spent almost a decade as a journalist, including as a foreign policy correspondent at The Atlantic, editor and writer at The New Republic, and Middle East correspondent for Newsweek based in Egypt and Lebanon and covering most of the Arab world. His work has also appeared in The Wall Street Journal, Foreign Affairs, Guardian, Slate, New York, and various other publications, and he has appeared as an analyst on NBC News, CNN, and Fox News.

He has received fellowships to study topics including the Muslim Brotherhood in Jordan, the Kifaya reform movement in Egypt, public health in Bombay slums, religious identity in Kashmir, historical memory in Palestinian refugee camps, and the role of religion in Lebanese politics. He has also reported from such places as Iraq, Saudi Arabia, Turkey, Dubai, Sri Lanka, Japan, and Korea. His writings have earned him awards from the Overseas Press Club and Scripps Howard Foundation.

He is a Visiting Fellow at the National Defense University, a certified Design Thinking instructor by the LUMA Institute, a fellow at the Truman National Security Project, and a member of the Aspen Institute's Socrates Society. He has a bachelor's degree from Yale University and studied Arabic at the American University in Cairo.