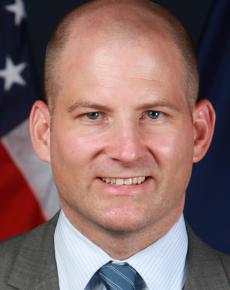 Appointed by Mayor Michael Bloomberg to lead the New York City Department of Environmental Protection, Commissioner Caswell F. (Cas) Holloway took office on January 1, 2010.  Prior to his appointment, he served as Chief of Staff to Deputy Mayor for Operations Edward Skyler and as Special Advisor to Mayor Bloomberg.

Joining the Mayor’s Office in 2006, Cas was tasked with finding solutions to some of the City’s most complex challenges.  He was instrumental in the writing and implementation of the Administration’s report on the health impacts of the September 11, 2001 terrorist attacks and led negotiations on legislation that has since been introduced in both houses of the United States Congress.  Following the tragic fire at 130 Liberty Street in August 2007, Cas led a comprehensive review and overhaul of abatement and demolition processes.

He played an important role in the passage and ongoing implementation of the City’s Solid Waste Management Plan, which established an equitable and environmentally sustainable system for dealing with the City’s waste for the next twenty years and beyond.  Cas spearheaded a number of key initiatives, like the new citywide public recycling program, and working with the Fire Department to implement new inspection protocols and safety measures for first responders on construction sites.  In 2009, he led the negotiations that resulted in Project Labor Agreements that cover $5.3 billion in public projects, and will save the City $300 million over the next 4 years, all of which will be re-invested in dozens of major infrastructure projects and will create approximately 1,800 additional construction jobs.  The Agreements also include provisions that will ensure better access to good construction jobs for Minority and Women-owned small-businesses.