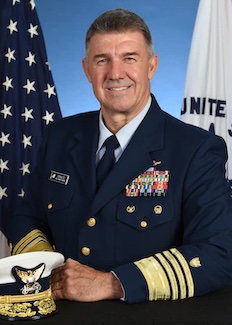 Admiral Karl L. Schultz assumed the duties as the 26th Commandant of the United States Coast Guard on June 1, 2018. As Commandant, he oversees all global Coast Guard operations and 41,000 active-duty, 6,200 reserve, and 8,500 civilian personnel, as well as the support of 25,000 Coast Guard Auxiliary volunteers.

He previously served from August 2016 to May 2018 as Commander, Atlantic Area where he was the operational commander for all Coast Guard missions spanning five Coast Guard Districts and 40 states. He concurrently served as Director, DHS Joint Task Force-East, responsible for achieving the objectives of the DHS Southern Border and Approaches Campaign Plan throughout the Caribbean Sea and Eastern Pacific Region, including Central America.

Prior flag assignments include Director of Operations (J3), U.S. Southern Command in Doral, Florida; Commander, Eleventh Coast Guard District in Alameda, California; and Director of Governmental and Public Affairs at Coast Guard Headquarters in Washington, D.C. Previous operational assignments include Sector Commander in Miami, Florida, as well as command tours aboard Cutters VENTUROUS, ACACIA, and FARALLON. His senior staff assignments include Chief of the Office of Congressional and Governmental Affairs; Congressional Liaison to the U.S. House of Representatives; Liaison Officer to the U.S. Department of State, Bureau for International Narcotics and Law Enforcement Affairs; Assignment Officer at the Coast Guard Personnel Command; and Command Duty Officer in the Seventh Coast Guard District Operations Center in Miami.

A native of Connecticut, Admiral Schultz graduated from the Coast Guard Academy in 1983, earning a Bachelor of Science degree in Civil Engineering. In 1992, he was awarded a Master's Degree in Public Administration from the University of Connecticut, and in 2006, completed a one year National Security Fellowship at Harvard University's Kennedy School of Government.